The three-day 2009 Nieman Conference on Narrative Journalism ended yesterday. One of the most invigortaing three days.

I had no idea what I was in for when I signed up to volunteer. But to say that "it blew me away," would be an understatement.

From the moment Connie Schultz, Pulitzer-prize winning columnist began speaking at the keynote address, I knew I was in the right place. The Grand Ballroom at The Sheraton in Boston was filled with journalists and writers from The Chicago Tribune, The New York Times, Columbia University and The Poynter Institute. It would be hard to find a larger gathering of like-minded people who made a living from telling stories.

In the next 72 hours, I was swept away with Schultz speaking candidly about her family and how her personal ties affect her writing career. It was lively and upbeat, an uplifting talk. I heard Mara Schiavocampo, digital correspondent for NBC Nightly News with Brian Williams, talk about telling a story through video while making it sound so simple. And I heard Amy O'Leary, multimedia producer for The New York Times talk about doing the same through audio.

There was a "networking" lunch on Saturday afternoon where I munched on a turkey sandwich while in conversation with a travel writer for The Chicago Tribune. Did I mention that lunch was delicious, that came packed in a pretty cardboard box, complete with pasta salad and brownie? The writer was super nice too.

I had a chance to meet health editor for The Times of India, Kalpana Jain, who is a 2009 Nieman Fellow and such a lovely person.

I listened with wide-eyed fascination, wrote feverishly until the white pages of my notebook were covered in black squiggles and then sat back and smiled, partially happy about the fantastic event and partially to digest the four varieties of cheese and strawberries I had eaten during refreshments.

I can't wait until Nieman is back again next year.

On another note, Ying and I went running yesterday despite the temperature being all of 1 degree celcius, according to Indian standards. Bundled in sweatshirts and tracks, we pounded away at the pavement before we ready to call it a night. We headed back to my place, shared a dinner of palak paneer and naan (yeah, yeah, who's counting the calories anyway?) and then kicked back with ice-cream sandwiches to watch the latest episode of Desperate Housewives. Sigh...the simple joys of life.

On an entirely different note, I also made it all the way out to Gardner, Mass. and back all on my own today. That would be the equivalent of going between Bangalore and Mysore and returning. Sure, it's no major feat, but when the whole thing is planned on google maps using public transport, I think it accounts for something. Reason for going out to the industrial town was to interview the president of a federal credit union who was extremely warm and coopertative. Since we had to cut short the interview because of a "webinar" (I love that word) which she had to tend to, there's a possibility I may be Skyping with her in the future. Yes, I may succeed in convincing the president of a federal credit union to Skype with me to finish the interview.

While walking through dowtown Boston the other day, the answer finally hit me.
I love this new city which I've spent the last few months in. The public transport is great, the people are friendly and in many ways it's like my hometown of Bangalore. There are no rigid rules, no one cares if you wear trousers or tracks to class, there are plenty of interesting places to eat if you only know where to look for them. So what was has prevented me from falling hopelessly in love with the place, apart from the fact that it's not home?
I miss the chaos! I miss the unruly traffic and blaring horns. I miss the pulse of a Southern Indian city gasping for breath everyday as hordes make it home, IT capital and more. I like to belive it actually enjoys it, all the attention. I miss the buzz at the local supermarket as opposed to the polite chatter at Trader Joe's (although I looove Trader Joe's!). Pedestrains actually have a pavement to walk on here and the right of way! Who would've thought such a think exists?! And the taxis actually take you exactly where you want to go without the question of "one and a half meter, madam." I must be dreaming.
All of the above used to drive me insane in Bangalore. And the newly-developed Metro, that is still under construction, meant that a slew of trees on M.G. Road had to be slayed. That hit a raw nerve. I was irritable and short-tempered because of all this confusion which I thought was completely unecessary. But somehow, strangely, I miss it now. I never thought I'd find myself saying that. I guess I need that madness albeit in small doses. A theory I will still firmly stand by.
In Boston, everthing is neatly divided - the financial district, the business district, south Boston, the harbor area. It's so orderly. I miss setting out two hours to get from Jayamahal to Jayanagar. And getting caught on the flyover when I thought I'd take a "short-cut" on the Koramangala Ring Road. Sigh, come to think of it, it's probably easier to miss these things when the exhaust pipe of the BMTC bus in front of you is not causing mild asphixiation. And the luna sandwiched between the manic Cititaxi and your car decided he would achieve world notriety by proving he could fit his narrow vehicle in all of three inches of space. Which he did, but then he knocked the sideview mirror of your car. And while you were busy muttering curses to his ancestry under your breath, he was already busy trying a similar feat with two other behicles further up in the traffic mess.
I miss you Bangalore and I like you Boston. 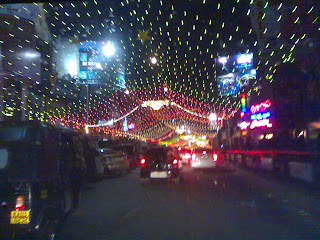 Above is Brigade Road, Bangalore all dressed up for Christmas and New Year - an annual, much-loved schindig. 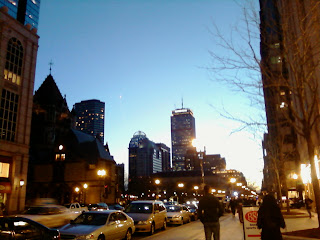 Above is a picture of dowtown Boston by night.

The student-teacher relationship has long been an interesting one and which is percieved differently among world cultures. Some are taught to fear their teachers, adulate them like gods, bow down in ultimate obedience. You get the drift. And in others it's quite the opposite, where the establishing of an equal relationship is encouraged. To share ideas and learn from each other.

But what possibly doesn't change is that all teachers have lives outside school, just like their students. which often isn't given much thought. Every morning, when we walk into class, there's the professor, waiting to begin another class, surrounded by all the symbols that give them that status - pens, notes, slides. Ever thought what they ate for breakfast? Who's their best friend? Where did they go on their last holiday? The characteristics that make them people, not just teachers.

Recently, I've been discovering the backgrounds of my professors based on what they share in class and their work which is available online. So many of them have fascinating existences beyond the premises of 640 Commonwealth Avenue.

As mentioned in some of my previous posts, one has Parkinson's and fights the disease everyday with a beautiful, undying sprit. Another had a rough childhood, rougher marriage and emerged from both, stronger and sparkling. And some share lifetimes with the same person, cherishing their spouse whom they're glad to have by their side as their teenaged children head off to college. I feel like Matilda in Roald Dahl's book by the same name, who learns of Ms. Jenny's life outside school.

The next time you're in class, let your mind wander just this once. Try seeing your teacher as a person rather than a professor, for just a couple of moments. You may gain an education rather than a lesson.
Posted by In love with the city at 3:26 AM 3 comments:

An overdose of champagne, white lace and three-tiered cakes

What is it with American cable and so many shows about weddings, marriage and other shenanigans that surround the topic? Recently, it's been virtually impossible to flip channels with at least one bridal show airing at the time. Irrespective of what time of day or night it is!

Bridezilla, Platinum Weddings, Confessions of an American Bride (which is a full-length movie)...is it just me or is the amount of content bordering on unhealthy?

The yoga class turned out to be everything I expected and some more.

Before heading there however, I stopped off at the robotics competition at the Agganis Arena. The stadium was filled with a cheering crowd as area schools competed to prove their robot was the best. The smell of pizza filled the space and loud, upbeat music added a nice finishing touch.

Getting back to the yoga class, it looked a little weird from the outside. It had ugly neon signs and just looked like no one had bothered to enter in at least five years. But inside, it was clean, with soft lighting and wafting music.

I grabbed a yoga mat and did many of the 'asanas'. I'd like to think my yoga teacher was quite pleased with me :)

Shutting out Somerville, MA for an hor and a half, we strecthed and breathed, until I felt so calm that the traffic on the street outside started to sound like waves.

After the class, I treated myself to some home style Bangaladeshi food - chicken jalfrezi, rice and roti. Perfect would be an understatement. Tender meat slow cooked in a medley of spices. I poosibly discounted the value of the yoga class. But the chicken was so hypnotically good, I could hardly seem to care.

Not a bad idea, this yoga class. There's no saying I won't make it a more regular practice.
Posted by In love with the city at 9:06 AM 2 comments:

Today was so interesting, I felt like documenting all of it.

I'm working on a story about alternative healing techniques in Boston and interviewed an acupuncturist. Initially, I thought I'd ask my questions and be done in under half an hour. But I stayed for close to two hours listening about the fascinating method and finally got pricked with my first acupuncture needle too. Not as bad as I had anticipated. A slight tingling pain, but that's about it.

Tomorrow I try out a yoga class in Cambridge.

Then my friend from Shanghai who lives with an American family invited me for dinner to their house. Wonderful people, with the cutest dog (who I took on a walk). In keeping with their faith, they had a traditional Sabbath. Since this wasn't my first, I wasn't so much of the wide-eyed tourist this time round. But it was still a new feeling, allowing the prayer to engulf the dining room and fill the guests with a soothing calm, the sonorous notes dancing off the walls.

We ate roasted potatoes, baked cod, Muligatawny soup (made espcially for me) and carrot cake with frosting. Simply divine.

A thought that crossed my mind during dinner. Photographers depend so much on light for the right picture yet spend so much time in the darkness developing the perfect shot.

Noam Chomsky visited campus a few days ago and I had the privilege of hearing him speak at the law tower. It was a provocative discussion which sparked tempers.

My story made it to the front page. Check it out here.

“Maybe some women aren't meant to be tamed. Maybe they just need to run free till they find someone just as wild to run with them.”
Posted by In love with the city at 8:02 PM 2 comments:

Get the word out

Confessions of a Diva